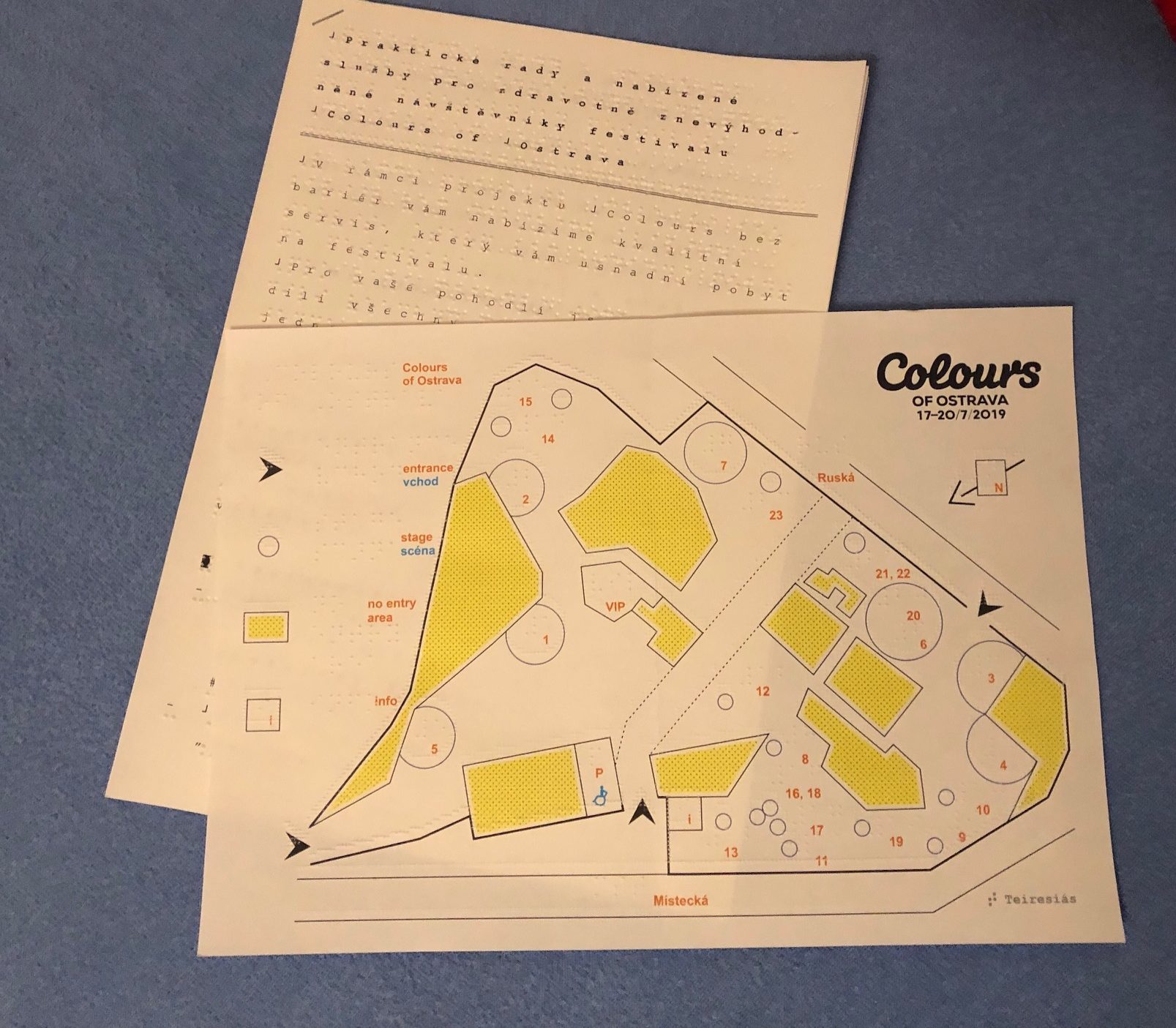 Report: Colours of Ostrava – How to Enjoy a Festival without Barriers

The festival Colours of Ostrava is one of the biggest and most original festivals in the Czech Republic. In addition, as one of the few, it is trying to meet the needs of disabled visitors, of course, including the blind and partially sighted. Within the project Colors without Barriers, it offers a lot of interesting services. This is one of the reasons why I visited the festival already for the seventh time. Below I bring you a little throwback at how I enjoyed the festival, what opportunities are offered to a visually impaired visitor and little thought about what could be improved.

This year’s Colors started quite unusually for us by searching for a parking spot. But to take it from the beginning… There are plenty of services and benefits for those with disabilities to make their stay at the festival easier. Almost all of them can be used by the visually impaired too. It is worth mentioning, for example, the possibility of ordering assistance to accompany the person throughout the festival including specially trained assistants to accompany the blind, something that I have never encountered anywhere else and which I definitely appreciate. It would certainly be worth trying but I had no problem with the accompaniment because it has been my similarly musically enthusiastic dad since the beginning of our visits seven years ago.

Another advantage for disabled visitors is the possibility of booking a parking space right next to the entrance to the premises. Although primarily intended for people with physical disabilities, it has been a big advantage for us too because we drive to the festival (and, to be honest, finding a parking space in the center of Ostrava is quite a superhuman task even during weekdays, let alone when there is a festival for tens of thousands of visitors) and the night transportation through the city with a white cane and finding a car, even if accompanied, is also no joy .. (as we experienced this year). This year, in any case, it was already fully booked in May, when it is normally starting to be booked. Well, the popularity of the festival has probably grown a lot among disabled people…

Another surprise, and unfortunately again unpleasant, awaited us at the entrance. But I will start with the positive: For the disability card holders, the price of the ticket is significantly lower than the price of an ordinary ticket and the escort can go completely free, which is probably one of the main attractions. As I recently read, more than 1000 disabled people participated in this year’s event. Unfortunately, these tickets can be bought only on the spot. When we put the last two sentences together, it turns out to be a pretty long queue of wheelchairs, crutches, white canes and other tools gruffly waiting, swearing, and in our case moving two meters in half an hour. Even though we arrived relatively early, we were afraid that we could miss the main star of the evening – MØ, Fortunately, , after some time, the employees took the initiative and involved more ticket vendors, speeding up the movement of the queue and what seemed threatening in the beginning went quite quickly at the end and we managed to see the MØ concert..

In front of the entrance, there was also the center for the disabled where I got the basic information about the festival services in Braille and tactile map of the area, which I definitely appreciated. On the other hand, I missed an accessible program. It was nor available in Braille, unfortunately neither available in the festival app which was not screen-reader friendly.

But to get back to Wednesday’s music program, as I wrote, the main attraction was the singer MØ, who had a brilliant opening of the festival with her energetic show. We even managed to get relatively close to the stage, so I was able to capture something visually, but at the expense of sound, because we were standing right at the bass speaker. The MØ was followed by a walk through the area and by discovering some more musicians who were playing on smaller stages spread around the premises. For the first day it was enough, so we headed home before midnight..

Day two – contrasts not only in music, surprise and exhaustion

Friday was probably the longest, but also musically most colorful festival day for me. This time we arrived in the afternoon, and since we already had festival bracelets on our hands, there were no queues waiting for us. The first concert was Ben Cristovao, who performed with a live band. I enjoyed the concert from a special grandstand for disabled card holders. In my opinion, it is more suitable for wheelchair users who have a better view of the stage. Unfortunately, for me, the grandstand is too far away to see anything from the concert. However, I am used to it, and moreover I could concentrate on the concert in peace and quiet.

Then we moved to the main stage, where Tom Walker’s show has been already starting. For me he was again one of the main drawers of this year’s Colors. The concert was also great and I could enjoy it relatively close and without crowds. Then we took a two-hour break and tried out the local refreshment stalls and, incidentally, we met some friends. We went back to the main stage, this time featuring Rag’noneBone Man, but there were many more people than there were for Tom Walker, so we stayed well away from the stage. At the beginning the concert was a bit slower, but as soon as he started singing his better known songs, the atmosphere suddenly came alive and the ending was really phenomenal.

The Icelandic instrumentalist Ólafur Arnalds was already preparing at the second scene. I didn’t actually know him before, but after a full day’s fatigue he gave a great relax, which was helped by the fact that we almost “settled” on the grassy area. At the end I had to admit that his performance was one of my biggest surprises this year. After the rest we headed to Fresh stage, where we experienced the opposite of the previous concert, which was wilderness performed by the band 47SOUL. Even though I enjoyed the concert a lot, my legs and back had hurt so much after a long day that we had to leave before the end.

On the third day we had to split into two halves due to the unfortunate distribution of the performers. Already in the early afternoon we went to see the Czech songwriter Pokáč. Although the clouds were signalizing an upcoming storm, the crowd waiting to see this artist grew so big that they could not fit under the stage.

We returned to the concert of French beatboxer SARO and the French band Shaka Ponk.After the previous experience of visiting the Shaka Ponk concert in 2014, we were expecting a great show and we were not wrong. Moreover, we managed to get places right in front of the stage where the band spent most of the concert. On the one hand, it offered the advantage of great sound and direct contact with singers who communicated with the audience a lot and even made several stagedives, on the other hand I got a few bruises and trampled feet from those who tried to jump in the crowded space under the stage. Anyway, the Shaka Ponk concert was the highlight of this year’s Colours.

On the fourth day we didn’t have much strength after three hard days, but we still had the headliners in front of us. The Cure with their roughly two and a half hour long set, one of the favorite bands of my accompaniment by the way, and Spanish singer Rosalía, to which I was looking forward the most . We were both leaving this year´s festival excited and awaiting the next year.

I have to say that this year’s festival turned to be a huge success and I would definitely recommend other not only visually impaired people taking part in next years even though there are still some little things that can be improved.

One thought on “Report: Colours of Ostrava – How to Enjoy a Festival without Barriers”

This site uses Akismet to reduce spam. Learn how your comment data is processed.

Register for the newsletter

This website uses cookies to improve your experience while you navigate through the website. Out of these cookies, the cookies that are categorized as necessary are stored on your browser as they are essential for the working of basic functionalities of the website. We also use third-party cookies that help us analyze and understand how you use this website. These cookies will be stored in your browser only with your consent. You also have the option to opt-out of these cookies. But opting out of some of these cookies may have an effect on your browsing experience.
Necessary Always Enabled
Necessary cookies are absolutely essential for the website to function properly. This category only includes cookies that ensures basic functionalities and security features of the website. These cookies do not store any personal information.
Non-necessary
Any cookies that may not be particularly necessary for the website to function and is used specifically to collect user personal data via analytics, ads, other embedded contents are termed as non-necessary cookies. It is mandatory to procure user consent prior to running these cookies on your website.
SAVE & ACCEPT